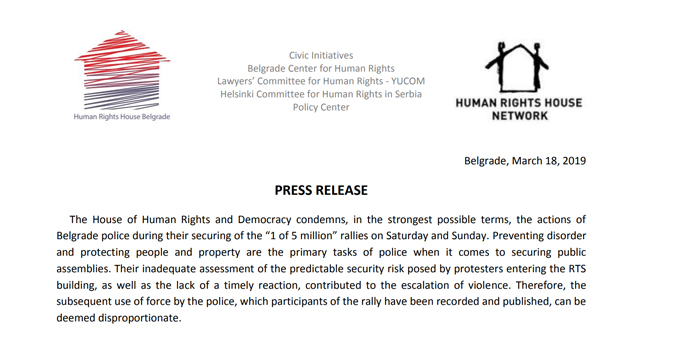 The House of Human Rights and Democracy condemns, in the strongest possible terms, the actions of Belgrade police during their securing of the “1 of 5 million” rallies on Saturday and Sunday. Preventing disorder and protecting people and property are the primary tasks of police when it comes to securing public assemblies. Their inadequate assessment of the predictable security risk posed by protesters entering the RTS building, as well as the lack of a timely reaction, contributed to the escalation of violence. Therefore, the subsequent use of force by the police, which participants of the rally have been recorded and published, can be deemed disproportionate.

In a society that has pretensions towards democracy, the existence of an institutional dialogue with citizens and representatives of the opposition is elementary. Calling for a subsequent institutional reaction, as a reprisal towards the demonstrators, represents an abuse of the law in the interest of furthering the goals of the ruling party.

Exercising the right to information, as a basic civil and political right, has been a clearly articulated demand by the citizens since the very beginning of the protests in December 2018. The only response from the national broadcaster and other media has been to report on incidents the police failed to prevent, with the intention of creating intolerance among citizens with opposing political views and the impression that a violent change of the state order is taking place. The criminal and misdemeanor proceedings initiated against the participants, which are the only thing presented to the public, even with tens of thousands of people protesting peacefully and making demands, contribute to this image.

The state ignoring the needs of citizens, who have been calling for dialogue over three months of protests, is the sole cause of the violence that took place during the week-end. We call on the political top of the country, as well as all competent state and independent institutions, to put a stop to any further polarization among citizens and to enable the bases for a democratic dialogue.

The House of Human Rights and Democracy is comprised of: