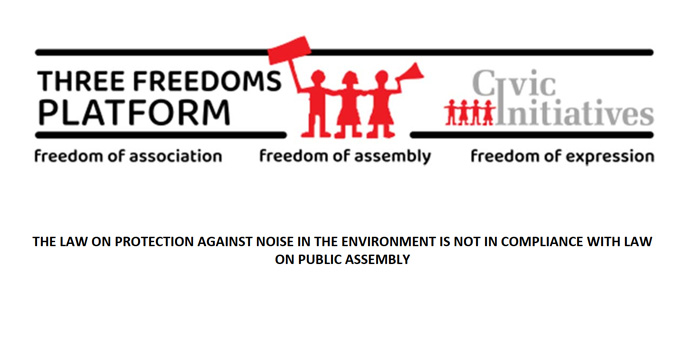 Organizations gathered around the “Three Freedoms” platform caution the National Assembly and the Serbian public that the Law on Protection against Noise in the Environment, adopted yesterday in the parliamentary procedure, is not in compliance with the Law on Public Assembly and international standards governing the right to freedom of assembly. At a time when a large number of public debates are taking place in Serbia on changes to the laws that affect the rule of law and human rights, leaving a very short deadline for analyzing regulations and sending comments, the Serbian government’s proposal restricting the right to public assembly went almost unnoticed.

Article 20 of the Law stipulates that local self-government decides on holding gatherings that may exceed the limit values of noise indicators. Additionally, the deadline for registration of such gatherings is 20 days. Local self-government, by a decision, regulates the streets, parts of streets and settlements, and other locations intended for such gatherings. This decision is contrary to the Law on Public Assembly, which prescribes that the deadline for reporting a public assembly is five days before the time set for the beginning of the assembly. The Law on Public Assembly regulates in detail the gathering place, ways, and conditions for restricting public gatherings, so that the place of gathering could be any place that is accessible unconditionally or under the same conditions to an individually indefinite number of persons.

The introduction of additional obligations for organizers of gatherings towards local self-governments, as well as extended deadlines for registration of gatherings, significantly complicates the holding of public gatherings. The proposer of the Law in the justification of the Proposal did not explain the reason for setting the deadline of 20 days, which is extremely long, especially taking into account the upcoming election campaign in 2022. Putting local self-government units in charge of deciding on holding of public gatherings that potentially exceed the noise limit, as well as on the places of these public gatherings, leaves room for abuse of noise protection regulations to limit political rallies.

Justifying this by protecting the environment, the Law also limits the ability of the participants to convey their message loudly, which means that the restrictions do not only apply to the use of sound systems but also any other way of making noise (shouting slogans, banging on pots, etc.). The Law doesn’t make a clear distinction between cultural and sporting events and political gatherings and regulates the confiscation of the object of the commission of the offense (speakers, megaphones, drums, etc.).

Freedom of public assembly implies that all peaceful assemblies are allowed. Restrictions on gatherings are not only a direct ban on a gathering but also any excessive and unnecessary imposition of obligations on the organizers of the gathering, which makes it difficult to organize the gathering. The adoption of regulations contrary to the already existing Law on Public Assembly creates a collision of legal norms that are detrimental to the freedom of public assembly as one of the basic civil and political right

The Three Freedoms Platform aims to contribute to the democratization of society, the rule of law, and the active participation of citizens through the protection and promotion of freedom of association, assembly, and information. The platform consists of: